All YOU need to know about Heavenward HERE! The first expansion of FFXIV: Come see what ‘3.0’ has to offer!

Hi guys! Get HYPED for HEAVENSWARD, the first official expansion of FFXIV! Heavensward (or FFXIV 3.0 Patch) has a veritable CHUNK of content. Let’s see what’s goin on in Heavensward! Forgive me for the long load time, there’s a chunky amount of info and images here! (will be constantly updated until launch)

FFXIV Patch 3.0 “Heavensward” will be released in June 23 2015.
If you pre-ordered Heavensward, you will be able to play in Heavensward Early Access: June 19 2015
Level cap raised to 60. Meaning new skills and traits for all classes and jobs
Being an expsansion pack, it must be purchased. Where to buy Heavensward?

Level Cap Raised to 60! And everything that goes with it!

FFXIV’s level cap is raised to 60 from 50. What does this mean for us?

Massive New areas, and all things that entail!

So with the level cap increased, that means we will be having new areas to come along with it! This means a lot more than you might first think:

The Foundation | The Pillars

The Churning Mists | The Sea of Clouds

And yes, some of those picstures do indeed have FLYING MOUNTS. These areas can be seen thru video @ Heavensward: Tour of the North. Again they say the new areas will be MASSIVE! And judging from these screens and vid, they look great. ((Back to Top))

Astrologer – Healer that uses a ‘celestial deck’, not much is known about this class but they seem awesome.
Vids & other previews:

Supposedly you only need level 30 of any base class to unlock these. My guess is they start at level 50 (purely speculation on the latter). ((Back to Top))

The Au Ra are horned humanoids that we can assume have some relation to dragons (purely speculation). As I learn more about the lore about these guys, I’ll update! Please comment if you know anything. ((Back to Top))

Airships can now be built and used by Free Companies! What does this mean? Well the team has a bunch of stuff planned for Airships in 3.0, but not all of it might be implemented ASAP. Here are some of the features regarding FC(personal?) Airships:

Flying mounts are also coming if in case you missed that by now, haha. Aside from personal travel, not much else is known for their uses. ((Back to Top))

Many Primals will be part of the 3.0 storyline, and our trials. Older players would recognize Bismarck. An all new primal making it’s debut in FFXIV is also coming: Ravana. Of course, what are primals without BEAST TRIBES? Of course, 2 new beast tribes will be making their debut here in Heavensward as well. The Gnath and the Vanu Vanu. 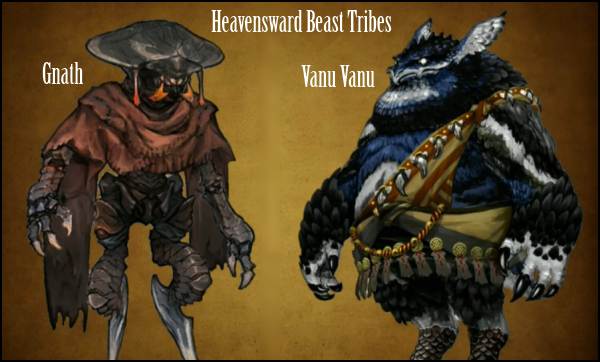 While they say Beastman quests might not be out for 3.0 straight away, they will definitely show up sooner or later. Of course, 3.0’s Primals and Beastmen are not limited by the two above, and we will likely see many old faces. ((Back to Top))

Much like the Binding Coils of Bahamut, we assume 3.0’s entirety of raiding will take place in and around Alexander. Older players will recognize Alexander as a “primal”. He’s most known for his recent appearance in FFXIII series as the ‘summon’ of Hope Estheim. His elemental affinity in most FF games is Holy – and for the old school guys – would remember his epic battle versus Bahamut in FF9. His appearance in every FF aside from 13 is that of a FULL SIZED CASTLE.

3.0 will be the first patch wherein raiding is split into EASY and HARD mode. Easy mode is meant for more casual players to traverse through coil, while Hard Mode will yield the highest item level, and will be the main focus of progression raiding. How the loot/lockout/unlocking of these modes is still a mystery to us.

Well, what exactly his significance is in 3.0 is yet to be known, but surely I’ll be spending a lot of time in there. While many hardcore raiders like me are left with a ton of unanswered questions about progression, we are definitely happy nonetheless! ((Back to Top))

Crafting is getting new recipes, obviously. Mentioned above, there will be “company crafting” which caters to Airships and Housing Items. They said that houses can now be “Glamoured”. In any case the biggest news in crafting will be the introduction of specializations. Specializations will make it such that no one guy can craft everything.

Oh, and crafters will be getting a brand new “AF” look, check out how DoH AF looks like in 3.0.

Of course, new nodes will be appearing in 3.0+, but aside from that there seems to be no news regarding any major changes to gathering. If anything at least (like crafters) Gatherers get a brand new AF look in Heavensward.

I’m a a fan of crafting and hope they really expand on it. Gathering on the other hand…. well I hope they have some great plans for it come 3.0 :)
((Back to Top))

For new players: I specifically created a leveling up guide that will serve your needs till the foreseeable future: Leveling general guide. I would suggest any vet to read this too, you might learn something.

For old players: You can check out my ever-growing compilation of ways to prepare for Heavensward. Newer players should also check this out just in case.

Heavensward: Official Trailer: SE’s first 3.0 trailer.
Heavesnward – Tour of the North: Official SE vid showing various maps. Seriously.. the soundtrack…
Reddit post detailing 3.0 in PAX East: translated ‘notes’ regarding 3.0
Heavensward Benchmark Tool: see how your rig runs 3.0
Preparing for Heavensward: Our little guide on what you can do NOW to affect your gameplay in 3.0

and again in case you haven’t already:

Please comment or add whatever else you may find out about Heavensward! Good luck for 3.0 and beyond!