All we know about Ifrit Extreme Mode in the upcoming 2.1 Patch!

Eruption – Now non-interrupt-able. There are variations of the basic single eruption, and the eruption that follows two different members (Like Ultima Weapon).

Crimson Cyclone – Ifrits rush skill. Now with a much fatter AoE and 4 clones!

Searing Wind – The key mechanic to Ifrit extreme mode. Always targets a healer. The target continually pulses a large AoE pushback. This does massive damage, and all other party members should avoid the afflicted healer.

Tank Swapping – Ifrits stacking debuff is especially nasty. Reduction of max hp for each stack – switch it up once the OT is clean!

Infernal Fetters – A chain that links 2 people together, it has 3 effects, becoming more severe as their distance grows. Obviously, stay close to each other to prevent this.

Infernal Nail – now causes damage and vulnerability up when killed. As usual, any nails present before Hellfire is cast means a KO for the party.

The first set of nails are pretty basic. 4 nails, 1 on each edge of the map. All dps should focus on the nail opposite from Ifrit, then once the searing wind target is determined melee may destroy the nail of the “safe” healer, and ranged on the “dangerous” healer.

Hellfire is cast and then then Radiant Plumes quickly after.

A note on Radiant Plumes

Radiant plume safe-spot is around 1:30 for this one.

The second set of nails goes all the way around the ring of the stage. Again, kill the opposite nails(melee), and nail nearest ifrit(ranged). When searing wind is refreshed, ranged and melee should clear the nails of the respective healers.

Infernal fetters makes its appearance here. The off-tank is targetted, and a random DPS. DPS and off-tank should travel closely together. This can be tricky when a tank swap is needed. Make sure that while the chain is on, you do not stay too far apart from each other.

Again, Hellfire is cast and then then Radiant Plumes quickly after.

Radiant plume safe-spot is around 2:00~ for this one. (Mirrored on opposite end)

The third and final set of nails are, well, everywhere. with one mega nail in the middle. 13 Nails in total. The large nail should be killed last. After identifying which healer has searing wind, DPS must work on the nails closest to healers, then outwards. Killing the large nail does quite a significant AoE pulse.

The final Hellfire is cast, and Ifrit should be defeated shortly after.

Radiant plume safe-spot is around 2:30~ for this one.

While your victory over the Ultima Weapon has set off waves of celebration across the land, the jubilation is short-lived, for the beast tribes are seeking to summon their gods once more. Confirmation has arrived that the Amalj’aa have already succeeded in calling forth Ifrit, who is returned far mightier than his last incarnation owing to the vast amounts of crystals he has gorged upon. Prepare yourself for a scorching encounter.

Ifrit hard mode is the first hard-mode boss you will encounter, as the entry level eight-man encounter. His fight has three phases, and a transition in between.

Phase 1 of Ifrit is just like Ifrit normal mode. He has the same abilities, but obviously much much stronger.

Infernal Nail shows up again. This time, there are FOUR that spawn. Failing to kill these will result in an instant KO by Hellfire.

Using a Summoner or Black Mage Limit Break is highly advised here, and makes this transition much easier.

He has all the same skills, only gaining Crimson Cyclone. 3 Clones max. Staying in between 2 of the clones is actually a safe zone.

Again, interrupting Eruption is the key to winning this fight. Make sure you have one or two guys (preferably Paladin) to interrupt it. However, make sure it’s a coordinated effort because doing stuns unnecessarily will result in him RESISTING the stun. DPS and Healers, have faith in the cancelling of Eruption. If you’re running with a good group, don’t move out of it. More movement = longer fight. But to be safe you can make a run for it each time Eruption lands at your feet.

Ranged / Healers – Do not stay too close to edge of the ring. An outer Radiant Plume will likely tag you, even if you run ASAP. Stay a good 25% away from the edge, as you can minimize movement to dodge either a inner or outer Radiant Plume. 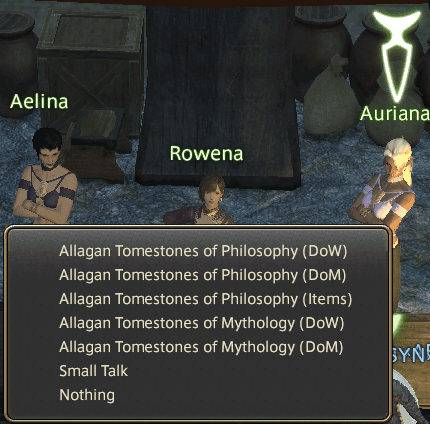 Ifrit is the first legitimate boss you’re going to fight. Don’t let nostalgia get to you: Ifrit can catch you off guard!

“Flame Breath”: A wide cone of fire without a warning area. It’s important that Ifrit never faces the rest of the party.

Vulcan Burst: (PBAoE, knockback): A huge AoE knockback. Don’t worry, the fire walls do not damage you. While annoying for casters, this does not do significant damage.

Eruption – A targetted AoE attack that you must run out of the moment you see it. The affected area is pretty big. Damage ranges from 50-75% of your health.

All of the above abilities will continue throughout the fight.

Infernal Nail – At 50% Health Ifrit will spawn “Infernal Nail”. This should be killed immediately. After a set amount of time, Ifrit will cast Hellfire. If Infernal Nail is still alive, your party will be KO’d.

Hellfire – Like mentioned above, a sure KO if Infernal Nail is still alive. This still does a huge amount of damage otherwise. There are two ways to deal with this, either a tank cast limit break before it hits, or a healer casts limit break after it lands. Either way is okay.

Radiant Plume – This ability can affect either the outer rim of the ring, or the inner area. It’s quite obvious, because the floor turns to Lava. After a few seconds of casting it explodes. Avoid this, because it can deal critical amount of damage.