403 Issues SHOULD BE SOLVED: After a very convoluted hunt to discover why and how this was happening - I took a rather extreme approach to squash the problem. There should be no more of this issue going forward.

Well, you’re playing a Final Fantasy game – you’re bound to get a Chocobo some time, right? Well, if you’re here – then you’re well on your way to a feathered friend. In our FFXIV Chocobo Guide, you’ll learn a few things about them, primarily How to Unlock and get your Chocobo (Mount), and how to get your Battle Chocobo Companion.

How to Unlock Chocobo Mount

It all starts here! This quest starts pretty much everything chocobo-centric.

The quest is “My Little Chocobo”, location depends on which Grand Company you’re in. It’s always in your GC Headquarters! 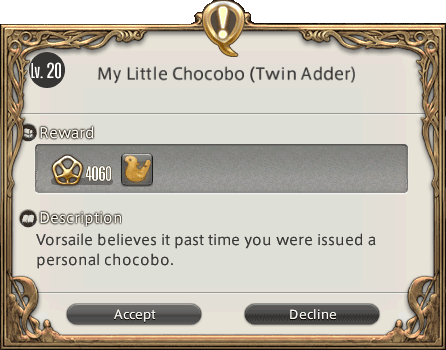 So that’s Limsa for Maelstrom, Gridania for Twin Adder, and Ul’dah for Immortal Flames.

After pledging allegiance to your chosen Grand Company, speak to your Grand Company Commander to get the quest

Nowadays, you only need 200 company seals to purchase a Chocobo Issuance.

How to farm GC Seals? 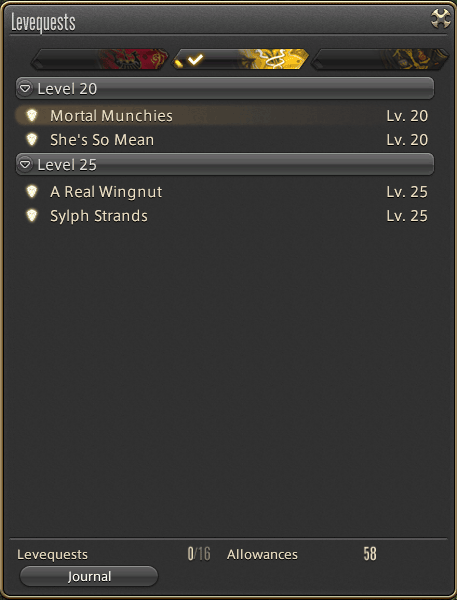 The quickest way to earn seals is Grand Company Leves, it takes only a few to earn 1,000 seals, if you maximize the bonuses. Company Leve locations (near this level) are as follows:

FATES are a great way to farm seals and EXP! Never pass up on a FATE!

If you have started crafting, you can also submit crafted items to earn seals through Delivery Missions. 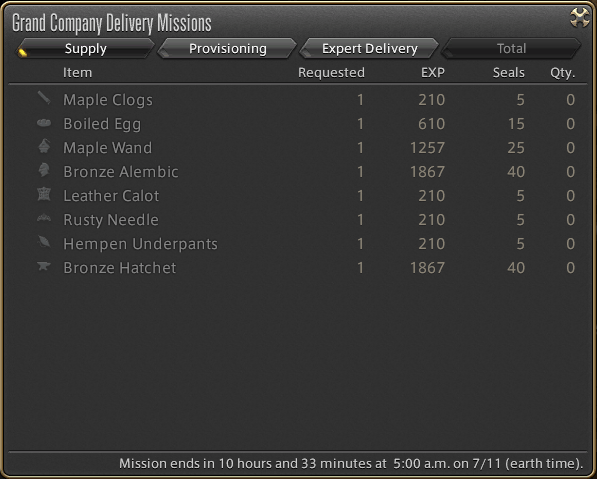 To see how many seals you have, click on your currency indicator and it will show your Seals.

After you get 200 seals, purchase a Chocobo Issuance from your Grand Company Quartermaster. 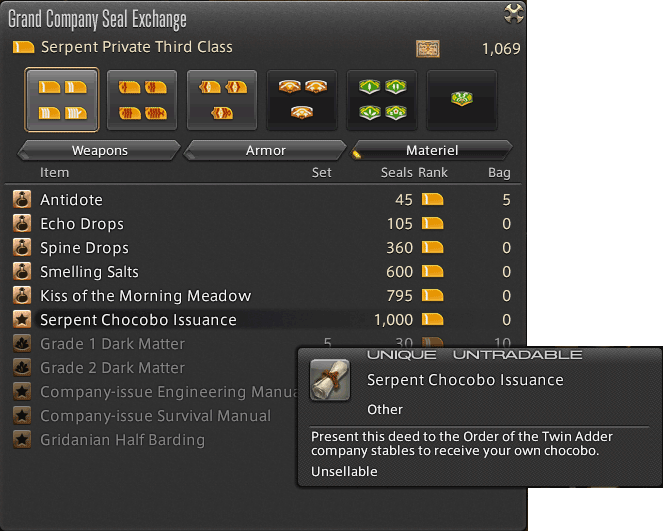 Present the Chocobo Issuance to the stablemaster at the Chocobo Stable located in the city of your allegiance and receive a Chocobo Whistle. 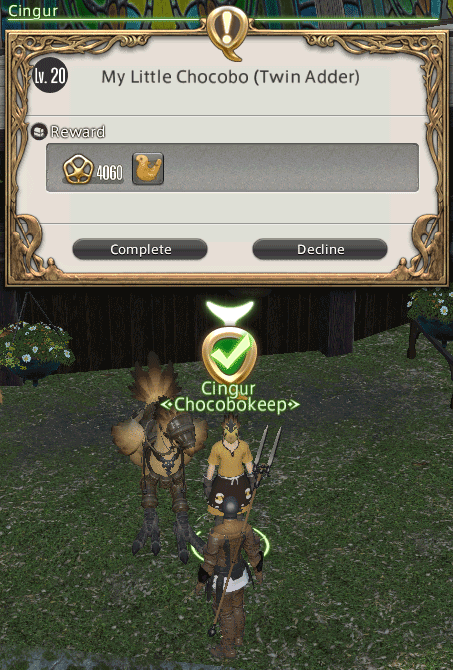 Name your new Chocobo, and there you have it! 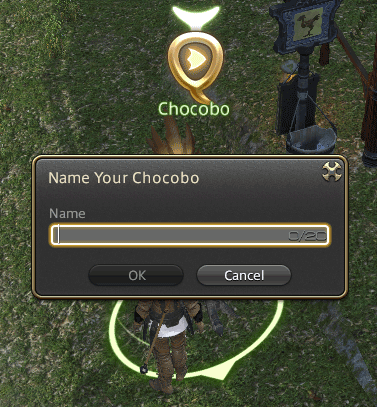 Congratulations! You’re now the proud owner of your very own Chocobo!

The Chocobo mount is likely one of the first mounts most players get. You can access this mount, and others, from the Character > Mount Guide menu, where you can place your mount into your hotbar for easy access.

How to unlock battle Chocobo?

While mounting your Chocobo is one thing – fighting alongside your plumed buddy is certainly another! Not all new players know about this, but it’s here! Formally, the “Battle Chocobo” system is called the “Companion” system.

The quest to unlock the companion system is called
“My Feisty Little Chocobo”, located at
Gridania, South Shroud – Camp Tranquil (17,28).

Where do you buy Gysahl Greens? To complete the quest AND use your Chocobo in battle, you’re gonna need to use these. Here’s a basic example of where to buy ’em.


Basically, these “basic vendor NPCs” sell them, and pretty much every major questing hub in the future.

How to summon your chocobo, or how to fight with a Chocobo?

Back in the day, Chocobo companions had a lot of BS surrounding it. You can’t queue up and they take up a party space! Plus other little annoyances that thankfully they patched out!

Can a Chocobo gain EXP and skills? What’s the best way to level them up?

Yes they gain EXP and skills. Discussion about these is found below. Best EXP for chocobos? Honestly, I can list down all the ways, in terms of “value”, in my perspective.

Well, this question was bound to come up. Chocobo skills are hard to come by as the game progresses, as they level up super slowly. This makes Chocobo SP (Skill Points, presumably) pretty valuable. If I was to give you a ROUGH GUIDELINE:

Why this priority? Healer is useful to almost every class, Tanks and DPS moreso. The times they are useful are SUPER NOTICEABLE. Allowing you to possibly solo content you previously could not have.

DPS is of course, “basic as it gets” since any extra DPS is welcome. However, this doesn’t come close to the potential upside of a healer chocobo. A tiny fraction faster with DPS chocobo is a lot worse than “making something previously impossible, possible” which is the ceiling for a healer chocobo.

Tank is almost utterly useless in its current state. It’s a junk version of DPS. I only traverse this tree for the stats. Try it out if you don’t believe me. Or maybe try it out for research sake. Every time I’ve gone back and did it – the tank tree sucked badly. Basically, they can’t take / hold aggro for the life of ’em!

I can place my own personalized skill order here in the future, but honestly… is it even needed…

Back in the day you needed a quest to unlock flight functionality on your GC issued chocobo. Now, I don’t think this is the case.

The quest was removed from the game and I’m pretty sure they give the GC chocobo flight by the time you’re allowed to fly on any mount at the map you’re in.

Typically, this unlocks for A Realm Reborn tier content at L50 MSQ, and for each expansion and map afterward after attuning to their respective “Aether Current” system.

Well that’s about it regarding Chocobos in FFXIV. Good luck leveling ’em up, coloring ’em up, and dressing ’em up! If you think we should be adding or correcting something on here, feel free to let us know!

Contact us about anything and everything. Don't be shy! Love our guides and want to let us know? Got questions or corrections? Suggestions for improvement? TALK TO US! How, you say?

Comment below if it's about this guide. Message us on any of our socials above about anything.  We're organizing our email situation if you're into that.