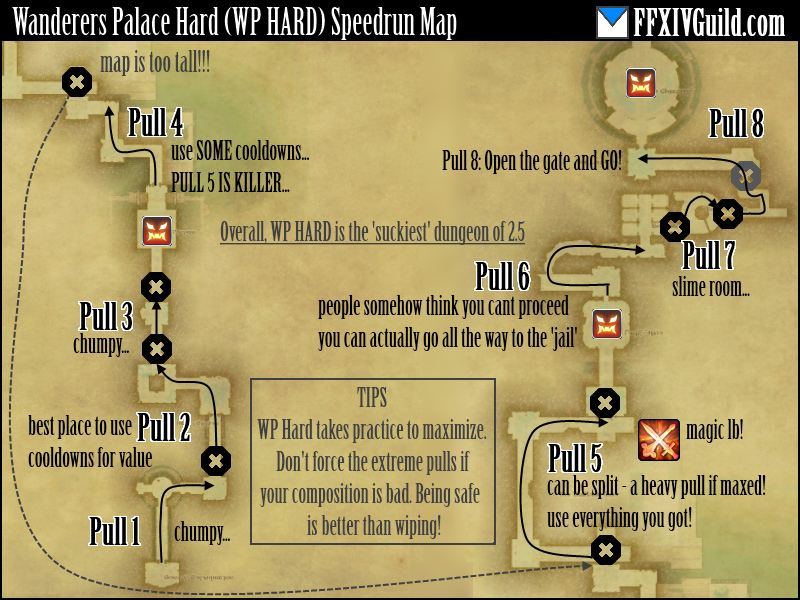 WP HARD is the longest dungeon in this bunch – it can be completed in a minimum of EIGHT PULLS. Although, for many groups, 9 or 10 seems to be the average! Special thanks to Claes Henrietta and Rylai Ariamis for the help with notes/map!

Pull 1: Small pull with 4 mobs, don’t waste anything here.
Pull 2: While not the beefiest of pulls, use your CD’s here since the next pull is chumpy, then boss follows
Pull 3: Small, time extending pull (boss 1 follows)

Pull 4: Can be a tricky pull due to camera angle, LOS the first pile behind the first corner, and get the rest of the chunk. Use SOME cooldowns here – it’s a bit heavy.
Pull 5: This pull is usually split, for good reason. It’s an insane pull that maxes out at 10 or 11 mobs. This, PLUS the fact the previous pull was heavy. Going all the way is NOT recommended for groups that AoE slowly. (boss 2 follows)

Pull  6: A lot of people think you have to stop at the 3 mobs.. you can actually pull allllll the way to the locked up tonberrys. It’s an easy pull of 5 mobs.
Pull 7: is a forced time waster. This is the “slime room”.
Pull 8: People usually split this but you can actually open the door and drag the pudding all the way to the end!!! This is value. (final boss follows)

Pull 5 is killer, you might need to chill out if you think your group isn’t up to snuff. We will be recording a vid of the “minimum possible pulls” for both warrior and paladin – stay tuned.

Overall a nondescript boss which doesn’t do anything special. To be honest, I want to type more here – but I just cant.

TIPS: Don’t stay too far from the boss. he has a MASSIVE cone attack that you might not get out of. Don’t tunnel – kill Sacred Idol ASAP.