AK Hard: General enemy tips
Tentacles: Give a VULNERABILITY UP debuff to YOU and YOUR ENEMIES – use them to your advantage!
Knotted Treant: They spawn weak adds, generally they can be ignored unless you pile them up with your SR pull.
Vulnerability Up on tank? No problem – esuna it! 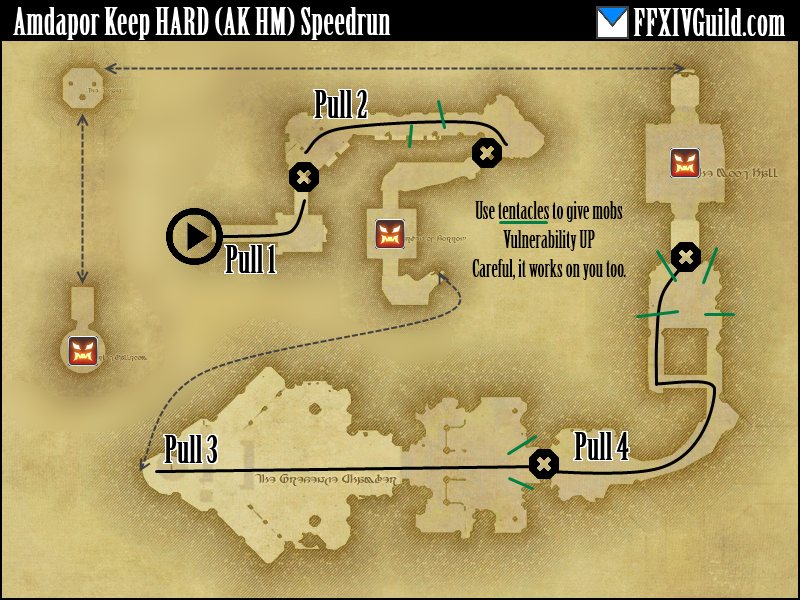 AK HM can be completed in a minimum of THREE BIG PULLS. Five or four if you’re being safe. And the forced “gauntlet” before the final boss. Special thanks to Claes Henrietta and Rylai Ariamis for the help with notes/map!! The above map says 4 pulls, but Pull 1 and 2 can be combined by killing the Ochu and proceeding (a bit on the risky side).

Pull 2: This is the only “debatable” pull, and is stragely difficult. there are three ways to do this:
Pull 2 MAX: Drag EVERYTHING to the treant.
Pull 2 using tentacle: Drag all non treant mobs back to the tentacle. potentially dangerous.
Pull 2 split: Drag whatever you can to the pre-treant tentacle, then the remaining chumps+tree.

The general consensus is Pull 2 MAX is the “best”, but can be a backbreaker. Pull 2 tentacle depends too much on mob movement, and Pull 2 split is best for iffy groups. You want to use all your cooldowns for this.

(boss 1)->Pull 3: A short pull, gather them up and use the tentacle to give the mobs vuln up. Kill tree after.
Pull 3 VALUE: Tag the mobs with tentacle vul up, then move to the tree.

Pull 4: This is a LONG WALK. Sprinting could be an option. As always sprint pulls are gonna be a little easier for paladins. Use the tentacle of heavenly value. ALWAYS
Pull 4 VALUE: Tag them with vuln up, then move to the tree. This can be very risky.

(boss 2), Gauntlet, then (boss3): And you’re done! Potentially the fastest SR in this tier of dungeons.

We will be recording a vid of the “minimum possible (3) pulls” for both warrior and paladin – stay tuned.

Not many special mechanics behind this guy. Just burn him as fast as possible. TIP: Tank reposition to new statue after each laser. No joke, lasers are fatal and you should avoid them.

TIP: The dead bodies on the ground signify the adds spawnpoints. The first set is the two chumps, second set is two chumps + fat.

The final boss isn’t very notable, pretty much common sense mechanics. TIP: Don’t clump up, the blades left by Black Wind can be annoying if you’re clumped up with friends.

I hope our Ampdapor Keep Hard guide was useful to you! As always, careful speedrunning and be good to first timers!