UPDATED! Keeper of the Lake dungeon strategy guide! Having trouble killing the last boss? Beat up those dragons – get in here and find out how!

Keeper of the Lake: Speedrun 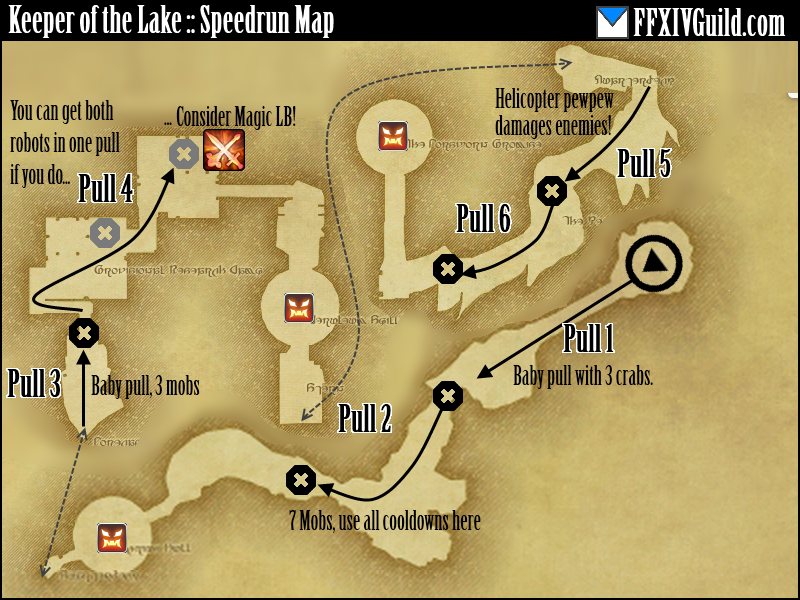 KOTL can be completed in a minimum of SIX PULLS. Seven should be the absolute max! Special thanks to Claes Henrietta and Rylai Ariamis for the help with notes/map!

Pull 3: Another time extending useless pull. Kill them and get the key to proceed.

Pull 4: THIS CAN (and USUALLY is) split into two. Aggro the chumps, kill the computer, aggro the robot then AoE them down. Do not kill the dudes, then robot… You can pull the whole family but this can be RISKY! This is by far the best use of LB if you do try to pull this off! (boss 2 follows)

Pull 5 and 6: The flying machine AoE’s AFFECT THE ENEMIES. Lure the AoE to the pile by having everyone loosely stack around the mobs, as it targets a random party member.

Spawns tanks of fuel at certain intervals. His frontal cleave (and presumably other skills) destroy it and deal damage to nearby allies. Face the boss away from all times and move away from tanks if needed. Sucks all tanks and party members towards him, so move a bit away and face him outside. In a nutshell

Having your MT make small efficient movements to prevent explosion clusterf*cks is key to reducing encounter time here. Pure tunneling, while possible, can cause some unexpected chain explosions.

A big mechanical middle finger to melee classes, this guy is just annoying.

After pulling the boss, a short time passes until first dragon (yellow) resurrrects:

Boss does a raidwide kill unless you are inside the shield. Kill yellow before the second (blue) dragon spawns:

Again, your party is dead if you fail to get into the shield. Kill the blue dragon before focusing on boss and killing it. Aside from the above, just avoid all the colorful AoE and you’ll be fine.

Well, I hope you found our Keeper of the Lake guide helpful! GL to you Speedrunners and new players alike!

5 thoughts on “FFXIV Keeper of The Lake Guide & Speedrun”