Getting tired of Titan? Are you stuck in Titan Hard Mode? Keep your hopes up and let us guide you through one of the most fulfilling fights in FFXIV ARR.

From deep within their mines, the kobolds have watched and waited for another opportunity to summon their Great Father and wreak havoc on Limsa Lominsa. With the destruction of Ultima Weapon, the final obstacle to their plans was removed, allowing the beastmen to summon their god without fear of imperial reprisal. Once more, it falls to you to ensure that the Lord of Crags never sees the light of day.

The first LEGIT Gear check in the game, and if you have lag issues, get ready to die in this fight! We had fun learning how to play Titan and beat him. We will show you two videos below, one is our first defeat of Titan and the second is where we helped a few of our FC members get past him.

One important thing to note is, all non-tank players must ideally have more than 3,500 life to survive this fight (specially important in the last phase where he does 6-8 Tumults straight). Lag and slow reaction time also play a major factor in beating Titan, you must be focused, know his rotation and position yourselves carefully in order to win.

In hard mode, Titan has some a new rotation with new abilities also 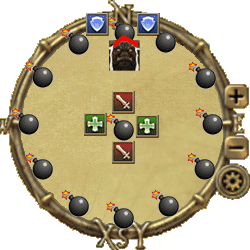 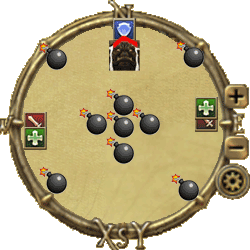 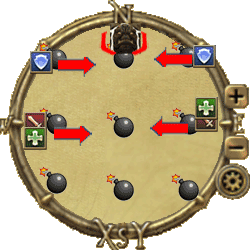 Tank: Positioning is important, mitigation should be timed. You want to position Titan as close to the edge as possible to give your party enough space behind to move around and dodge ‘Weight of the Land’. Positioning is also important during the ‘Bomb Boulder‘ phases. In our FC, it is the tanks job to memorize Titan’s rotation and call out ‘Weight of the Land‘ and ‘Mountain Buster‘ 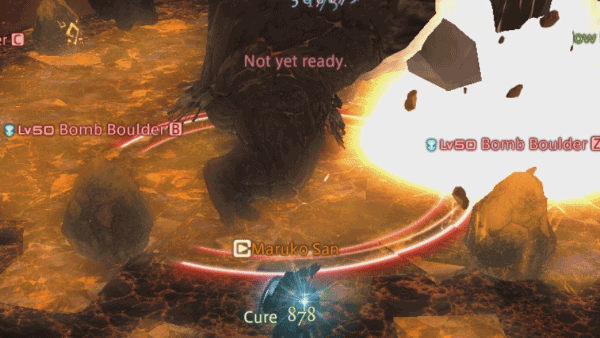 Healer: Healers are the key to this fight, if one falls you are in for a ride! Positioning is important for healers to make use of their AoE abilities, after each Geocrush, Healers need to pre-cast their heals so the party gets topped up and during the post heart phase the healers need to ensure they top-up the tank before ‘Mountain Buster’ and also pre-cast AoE heals before he does ‘Tumult‘

DPS: All the DPS need to be careful of is avoiding Landslide, Weight of the Land and getting to know positioning during the bomb phases. They must also be conscious of their position so that the healers can have a place to run to when weight of the land hits. 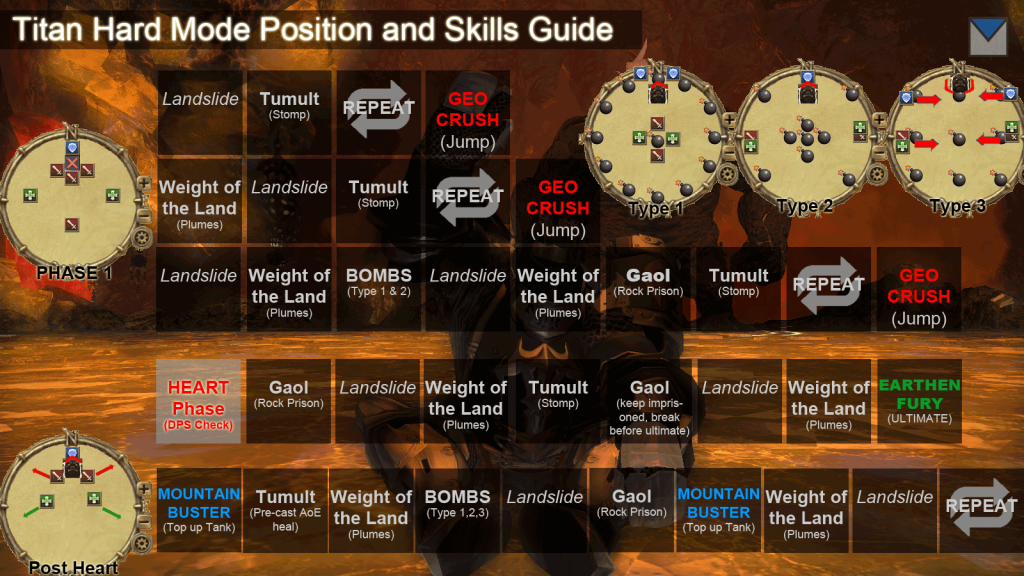 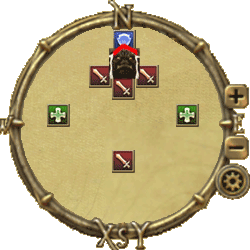 In the first phase we see Titan showcase some of his new abilities namely the Bomb Bomb rotations. This phase will test how well the group can dodge Landslide and Weight of the Land. You will also be able to get a feel for how much DPS your group can do. Remember to save DPS cooldowns for when he reaches the heart phase

One the heart pops out, pop all DPS cooldowns and make sure to free whoever is in a Gaol. Note that when he casts Gaol the second time, the party should ignore the Gaol and focus on defeating the heart. We suggest to use your limit break, whether level 1 or 2 right after he casts the last Landslide or Weight of the Land. Once the heart is defeated immediately focus your attention on the imprisoned party member, if they are not freed from the Gaol before he casts Earthen Fury, the party member will fall. 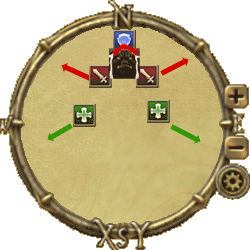 The scary phase here are the first 3, most specially for the healers who will need to ensure the tank is topped up just before Mountain Buster and immediately focus on healing the group in time for Tumult. Swiftcast for healers is an awesome and almost critical mitigating skill in this part of the fight.

The Bomb phase always takes first timers by surprise. The key to dodging the bombs in this phase is not to PANIC. in the Bombs Type 3, always remember that the middle bombs will explode first, simply find where the last exploding set of bombs are and stay in that area (dont be afraid to stand next to a bomb! you will need to move because he casts landslide) just remember to move to the center right after he lets go of landslide.

One more thing to note is that when he reaches about 25% life he increases the amount of Tumults he does from 6 to 8 times, this is where AoE healing and positioning is key.

Dont Release your Party Members from the Gaol until after he casts landslide on them like so: 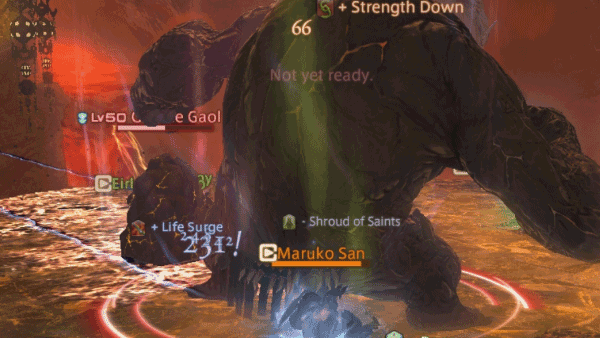 This is an example of Type 3 Bombs, in this case I move with the party to my left, and wait for Titan to cast landslide and then move to the middle 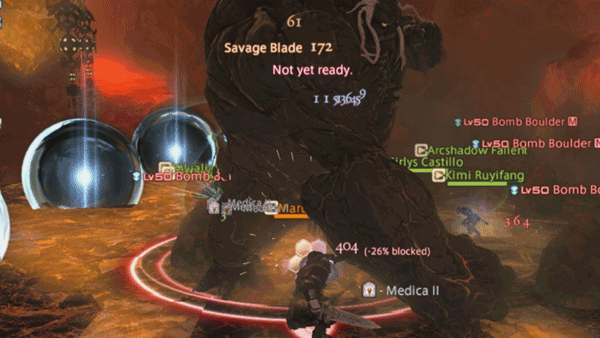 Sample Positioning for Weight of the Land 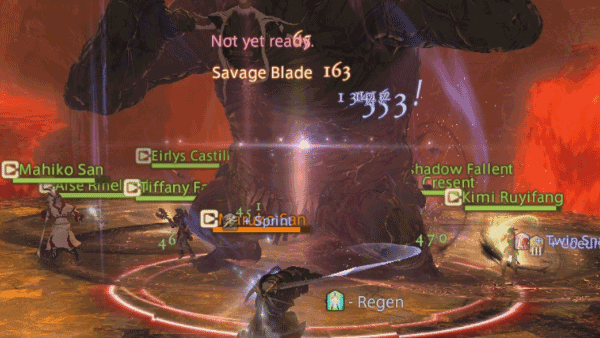 Finally, Good Luck in your fight with Titan! 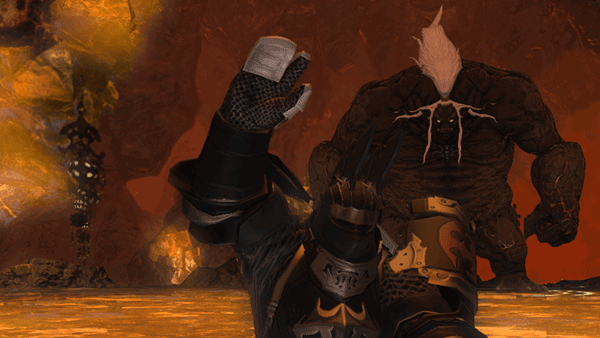