Welcome to the first issue of “Into the Aether”! For this week and the next issues, we will be discussing the possible next/new jobs and classes!

Into the Aether is one of our weekly editorials where we discuss and share our thoughts about what could be in store for FFXIV:ARR in the near future. These posts are purely our speculations and should not be considered as official announcements. We’re just letting our imagination run wild!

One of the most exciting things to wait for in FFXIV:ARR is the release of more classes and jobs. Over the course of the next few weeks, “Into the Aether” will reveal to you our predictions and discussions on what are the possible upcoming jobs and classes. Note that we are in no way “serious” or telling you that “We bet our souls it’s gonna be this!”. This is purely an exercise in fun!

First off, we decided that no one class can have two jobs of the same role type or have two of the important roles (healer & tank). There is however ONE exception which you will find out in the weeks to come!

We also took into heavy consideration the Gear Distribution and Role Distribution. We are also considering MUSKETEER as an existing base class because of the existing guild emblem in Limsa Lominsa.

So here’s going to be our weekly tracker: 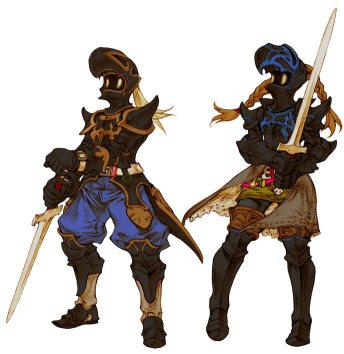 With advancements by the thaumaturges guild, control of the aether has been deemed safe for others to use. Because of this, Gladiators looking for a new style of fighting have come to learn channel the aether into their attacks. These new “Aether Knights” have been affectionately called, Dark Knights by the Coliseum fans. Although considered heretics by the Paladin Order, Dark Knights have been welcomed into Ul’Dah society by the populace. Are they trust worthy enough with their manipulation of the aether?

Core skills – what makes the DKN a Dark Knight?

Corrupt – Consumes one stack of Void Aether to deal a DoT. Uses MP.

Bloodsword – Combo from Riot Blade. Consumes all Void Aether to deal massive damage and at the cost of your own HP. The more Void Aether stacks consumed, the stronger the damage.

Drawing from Gladiator skills ,we had to find a way to change up the “tanky” nature of their skills. As a Dark Knight, choosing when to consume your Void Aether stacks will be vital. Do you keep your stacks for sustainability? Or burst your target down with Void Surge and Bloodsword?

Dark Knight in other FF’s

There are quite a few Dark Knights in other Final Fantasy titles. Names like Gafgarion from FF Tactics and of course, Cecil from FFIV. Dark Knights are also found in Final Fantasy XI as a playable class. (Yes, we’re aware some sources say Goffard Gafgarion was a “Fell Knight”.

What’s in store for next weeks Into the Aether? We will be revealing three of our speculated new jobs. Stay tuned! These jobs will be coming from Thaumaturge, Lancer and Musketeer!

This page will of course be updated as the game progresses and patches, and more gear will be introduced into the game.

[ Into the Aether Archives ]