How to beat Ramuh EX! Strategy Guide & Loot list! Find out all about thunderstorms, rolling thunder, overcharge and BALLS!

So you’ve gotten to Ramuh Extreme Mode? Don’t be shocked by this electrifying fight! Learn all you need to learn about this encounter – s – get those i100 rings! This fight isn’t very confusing mechanics wise – It’s all in the Execution, or Electrocution! Defeat the Lord of Levin EXTREME in no time with our strategy guide!

“Those balls are mine! Don’t touch them!” – Common Ramuh party chat

Ramuh EX has alot of mechanics that persist throughout the whole fight. Don’t be a chump and take these to heart!

Thunderstorm – is basically like Weight of The Land (Plumes). Except they FOLLOW whoever was chosen to get hit by it. There are also “Neutral” thunders that just stay on the ground wherever they spawned. The more BALLS present in the map, the more painful Thunderstorm gets. Do not stay in the water when Thunderstorm hits (or you die). Like plumes, Thunderstorm may hit you multiple times. Thunderstorm also has the benefit of removing Chaos. Speaking of Chaos…

Chaotic Strike – chooses 2 random party members. This happens after every other Thunderstorm. This is marked by a cross-hair. After a short delay, these guys will be “stunned” (Charmed). And start walking towards Ramuh. This is bad, because the next PBAoE attack Ramuh does will INSTANTLY KILL any charmed players. As mentioned earlier a Thunderstorm hit removes the “Charmed” status. (For initial position, see diagram below)

Strategy for Chaotic / Thunder: Use a waymark right behind Ramuh to signify WHERE CHAOTIC affected guys stack. From here we use a numbering system to “save” them. usually from 1-4.

When “saving” people from chaos – do not create a Venn Diagram of Clusterf*ckery. There is alot of space to spread out Thunder from hitting one another.

In his mind, he is the Venn Diagram. It’s him. – Mahiko “Charles Barkley” San.

The “Balls” – after each thunderstorm, balls spawn on the ground. Picking up 1 or 2 balls does nothing. Picking up 3 gives you a buff that protects you from Ramuhs “Cleave”. If you do not have this buff you will die. This is basically a tank-swap mechanic. Picking up a fourth ball results in “Overcharge”. You will still be protected but take significantly reduced healing. Overcharge can have 3 stacks. 3 Stacks means you will get little to no healing. Ideally you will never overcharge, but practically, you will need to OC on every phase change. Random balls lying around will increase damage of Thunderstorm significantly. It should go something like this

Six adds spawn in a circle around Ramuh. They don’t really have any remarkable attacks. However, they must be killed before Judgment Bolt is cast. Or else, you guessed it, it’s a wipe.

All of the previous mechanics are still happening in this phase. The largest problem most groups have during this phase is position. People getting cleaved, Chaotic Stack too far… stuff like this. So we decided – “Why not have the position remain the ‘same’…?” 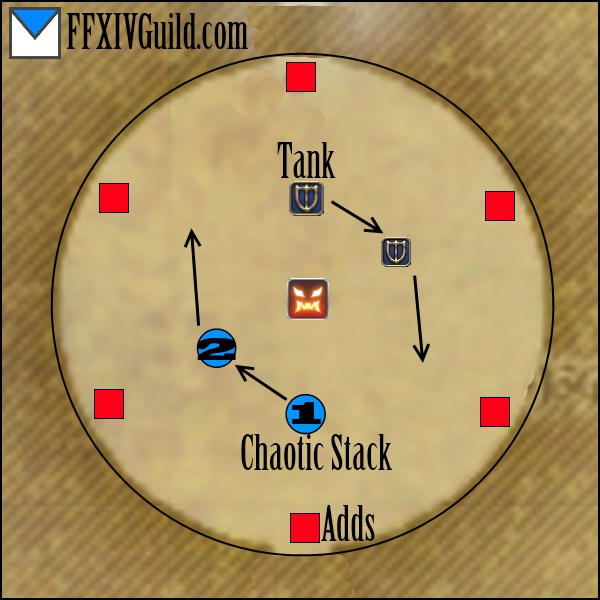 SO WHAT DOES THIS DIAGRAM MEAN? The best way to deal with this phase is to “shift” your whole teams position as each add dies. It’s practical because whatever your position in P1 was, it’s the same starting position for P2. Here’s the rundown of what needs to happen:

Upon entering P2, the current tank should overcharge to prevent random BS.

This way people always know where to go for Chaotic, DPS wont be randomly cleaved and killed, and tanks wont bother the whole process of killing adds and saving people. Before this phase ends (Judgment Bolt is cast) make sure there arent too many random balls lying around.

Again to prevent BS, you may have the current MT overcharge. All of Phase 1’s mechanics still persist into the final phase The only addition is…

Rolling Thunder: Creates a tether between two people. If either of these two people do any action, they take damage. The more actions you take, the more shocking the damage gets. Picking up 3 balls removes the tether.

Basically, instead of the  “ball cleanup” phase – it becomes a “Rolling Thunder removal” phase. Here are some reminders regarding Rolling Thunder:

OFFTANK should have tether cleaning priority since they need the insulation anyway. DPS should be next in line not to bother healing. Healers should stay still (unless tethered to each other). Healers who aren’t tethered should put up shields/regen on those who are, to be safe.

Nothing much else happens in P3. The adds spawn again but they cannot be targetted. They only do random lightning lasers which should be avoided!

Ramuh drops i100 rings and i100 weapons. A ring drops every time, but the weapon is quite rare.

Again, this is our in-house strategy, and what we used in our first kill. If you have any suggestions or something to say – hit the comments below!